Manutan:
over 50 years
of history

In 2020, Manutan France and IronmongeryDirect obtained the Best Workplaces label.

In June 2019, Manutan enhanced its product range by acquiring Kruizinga, an expert in the online distribution of storage and handling equipment in the Netherlands.

In April 2019, Manutan France placed in the Best Workplaces France rankings for the third year running. 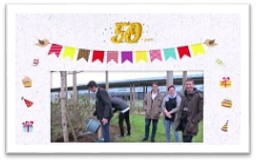 2016, a symbolic milestone for the Group: Manutan celebrated its 50th birthday!

The project that was launched back in 2012 to redesign the Group's information system was successfully completed. Following Belgium, Italy, Portugal, Switzerland, Germany and Spain, it is France's turn to install the new ERP.

June 2015, the Group acquired Papeteries Pichon, a specialist distributor of school suppliers to nurseries and primary schools in France, thereby reinforcing its status as a leading player in the local authorities sector in France.

October 2013, the acquisition of Ikaros Cleantech, specialising in environmental protection products in the Swedish and Finnish markets, enabled the Group to broaden its product range and strengthen its position in Scandinavia.

July 2013, as part of its ambition to broaden its product range and strengthen its footprint in the United Kingdom, with its sights especially trained on the specialist customer segment, the Group acquired IronmongeryDirect, an expert in delivering ironmongery products to tradesmen.

2013 was marked by the launch of the new Manutan logo and the deployment of the Manutan brand across Europe.

The Manutan Group embarked on a new chapter in its history. Putting in place an integrated organisational structure, strengthening its high ambitions for its business, and sticking closely to human values will all be major cornerstones of the Group's development in the coming years.

August 2011, the Group opened the doors of its European Centre in Gonesse (France), which symbolises the Group's uniqueness, its ambitions and its business, human, and environmental vision.

October 2012, the Group confirmed its ambition to become a major player in the local authority multichannel retail market by buying Casal Sport, the French market leader in sales of sporting equipment to schools, town halls and federations.

The Manutan Group broke through the symbolic €500 million turnover barrier at the end of the 2007/2008 financial year. The acquisition of Rapid Racking Ltd in the United Kingdom in February 2008 strengthened the Group's presence in this area and enhanced its product offering. In 2009, the Group increased its presence in the local authority market through the acquisition of Camif Collectivités.

Manutan entered into e-business and defined the Group's Internet strategy. DA common technological communication platform for all Group companies was launched as early as 2001. The first e-business merchant sites were started up and e-procurement solutions were made available to Key Accounts. In 2003, the Group launched its strategy for the period to 2005 and designed its first European-wide offer.

In 2004, the Group pursued its European ambitions. The Group established operations in Spain, as well as in new members of the European Union, Poland, Hungary and Slovakia, under the Manutan brand. These new subsidiaries are operationally managed by the Group's Czech subsidiary (formerly Plus s.r.o.).

The Manutan Group then committed itself to the third phase of its European development:

1998 was marked by the creation of a new legal structure at the top of the Group.

Manutan SA absorbed Manupar, the holding company of the Guichard family (Document E registered by the AMF on 2 July 1998 under number E98-300). In 1999, the French distance selling operations of Manutan were transferred to a subsidiary called Manutan SA. The holding company was then renamed Manutan International.

In 1987, the Group began the second phase of its European development with:

Established by André and Jean-Pierre Guichard in 1966, Manutan was the first French company in catalogue selling of industrial equipment. Early 1970s, Manutan displayed its European ambitions with the establishment of subsidiaries in the United Kingdom (Key Industrial Equipment - 1973), Belgium (Manutan - 1974) and France (Bott - 1977). 1985 was marked by the listing of Manutan on the Second Marché of the Paris Stock Exchange.